It is likely that the Bitcoin price (BTC) is approaching R $ 500 thousand in the market soon, according to the weekly forecast of the Bitcoin Market. In a scenario of appreciation of the cryptocurrency, the Brazilian exchange says that the quotation could reach something close to US $ 85 thousand, in the pair BTC / USD.

According to the Cryptographic analysis published by the Bitcoin Market on Monday (5), BTC experiences an “ideal scenario for the resumption of the movement” of appreciation, following the upward trend that started in late 2020.

In other words, everything indicates that the cryptocurrency will continue to rise in the market, and should even break new records after being quoted above US $ 61 thousand for the first time recently.

First, the Bitcoin Market Cryptograph presents a cryptocurrency forecast on the BTC / USD pair. For analyst Thales Inada, the daily Bitcoin chart shows that the cryptocurrency has “greater chances of breaking up”.

Therefore, the expert predicts that the price of Bitcoin should reach $ 85,000 in the BTC / USD pair in the market. Right after breaking the 60,000 barrier, this should be the next level of resistance for the cryptocurrency.

“We can see that after each $ 60,000 test, the rejection has been running out of steam and buyers are reacting faster and faster.

Thus, on the daily chart we already have practically an ascending triangle, that is, a figure that has a greater chance of breaking upwards. The projection of the base of the triangle is between US $ 80 thousand and 85 thousand, a region that even coincides with the top of the green channel. ” 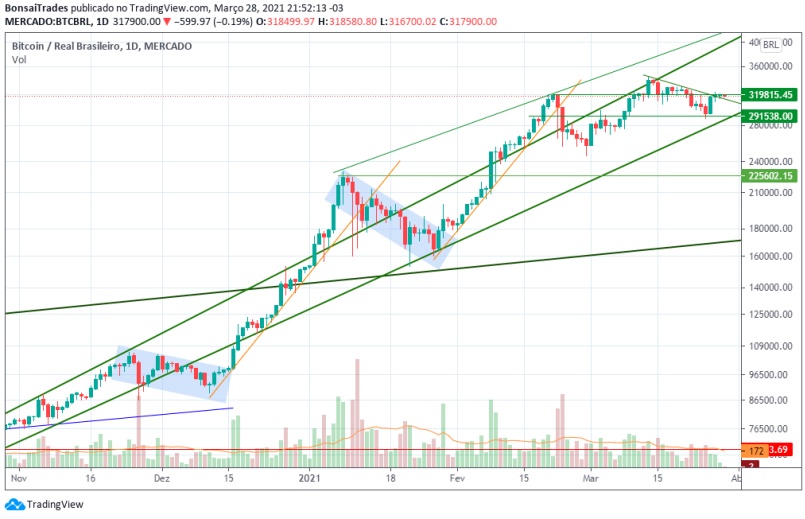 Second, the forecast analyzes the price of Bitcoin against the Brazilian real, through the BTC / BRL pair. In that case, the strong variation of the real against the US dollar has influenced the BTC quotation this way.

As the analysis points out, it was only in 2021 that the devaluation of the real made the price of Bitcoin jump in Brazil almost 10%. Thus, “the triangle is not very defined”, in the BTC / BRL pair.

Therefore, if in the BTC / USD pair the resistance in the market is around US $ 60 thousand, in the BTC / BRL trading pair this level tends to be something close to R $ 340 thousand.

“In reais, the triangle is not very well defined. Here we can even consider the resistance of R $ 340,000 as a trigger for the resumption of growth. 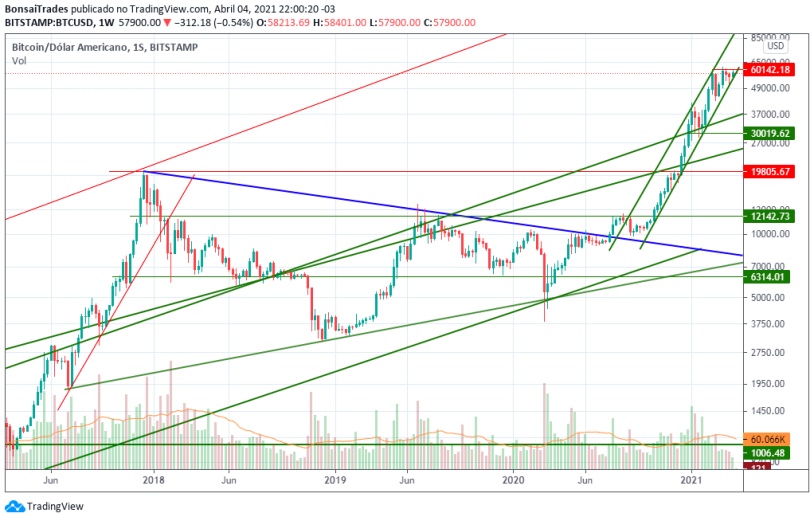 Before that, the price of Bitcoin has to lose support of R $ 320 thousand and subsequently R $ 290 thousand, in a scenario of complete devaluation. In addition to the BTC / BRL pair, in the event of a fall, the BTC quote can reach up to US $ 45 thousand, but in the BTC / USD trading pair.

“In reais, the triangle is not very well defined. Here we can even consider the resistance of R $ 340 thousand as a trigger for the resumption of growth. On the other hand, the loss of R $ 320 thousand can also cause a stronger correction. In this case, next supports at R $ 290 thousand and then R $ 255 thousand.

We can have a more significant correction only in the loss of the $ 55 thousand together with the LTA of the channel fund. The loss of the LTA may take us to the previous fund at around US $ 45,000, but as we mentioned earlier, this is a bullish pattern. ” 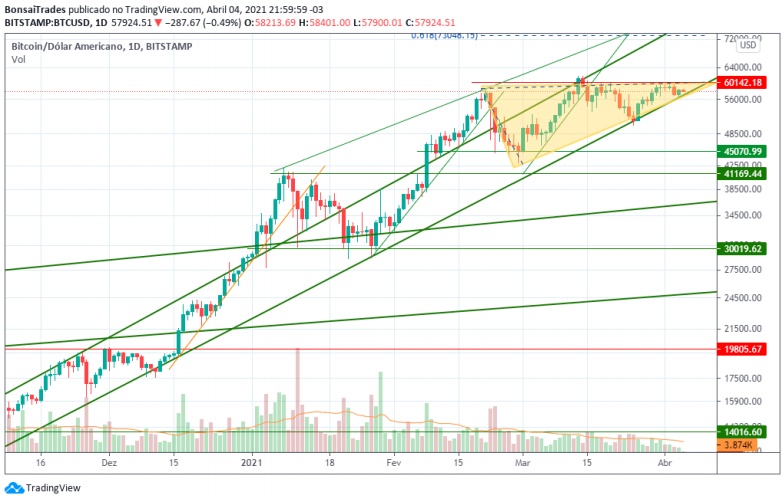