The cryptocurrency market has lost more than $200 billion in the last 24 hours, taking Bitcoin (BTC) at its lowest price since mid-October, with an intraday devaluation of 7%, and dropping the Ethereum (ETH) below $4,000, according to Dice of CoinMarketCap.

While traditional market analysts refer to the current slump as “Red Friday” and say the worst is yet to come, for cryptocurrency market experts it’s just what they expected. sexta-feira Negra, an opportunity to accumulate more currencies at low prices before the uptrend resumes.

The cryptocurrency market liquidations followed the losses in the stock markets and the US dollar index, which were allegedly prompted by the announcement of a new variant of the coronavirus discovered in South Africa.

An report published by Forbes highlighted the correlation of the cryptoactive market with the traditional market. Including the unusual parallelism between cryptocurrencies and the dollar, which tend to move in opposite directions, warned investors to be wary of possible capital flight from risky assets, which could further drive down the price of cryptocurrencies.

Alex Kuptsikevich, senior market analyst at FxPro, said the Bitcoin price is no longer entirely invulnerable to traditional market movements, in part due to the increasing participation of institutional investors in the cryptocurrency market:

“As stock market volatility increases, cryptocurrency investors should be on their guard. Because of institutional investors’ love affair with the crypto market, Bitcoin is substantially vulnerable to risky asset liquidation moments, regardless of the perspectives. The serious risk that befalls him drags the entire cryptocurrency market.”

The price of the BTC/USD pair dropped to the lowest level since 6 October, reaching 53,500. As of this writing, the price of BTC is in the $54,000 range and volatility is quite high. The green candle on the 4-hour chart appears to momentarily end the early morning bleed. 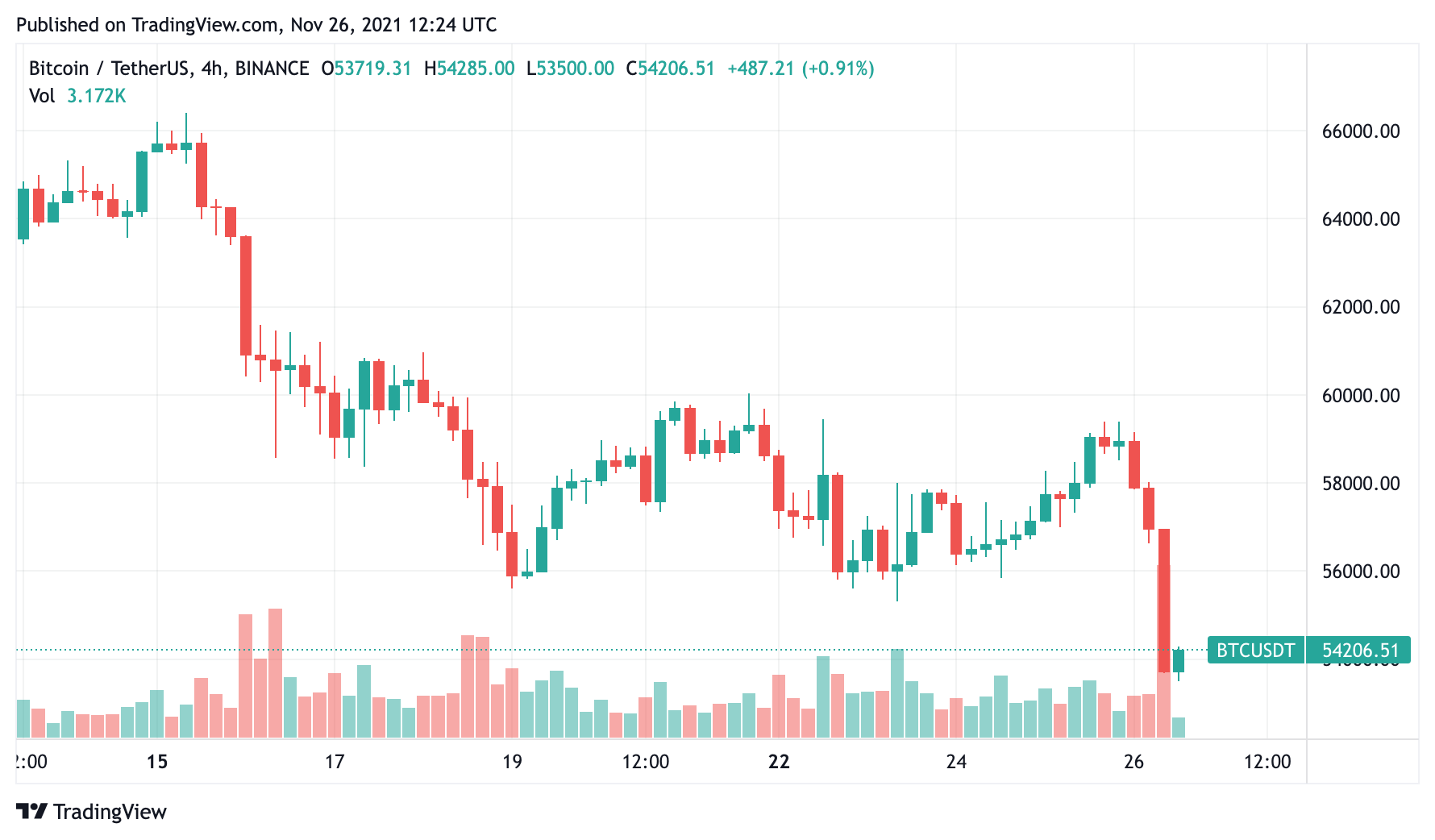 The cryptocurrency market experts and investors are confident that the recent drop is just another natural radical movement in cryptoactive prices. With a similar perspective to Kuptsikevich, Nigel Green, chief executive of the deVere Group, offers a more optimistic perspective for traders:

“Triggered by a mini wave of uncertainty, the parallel movements of the crypto market and stock markets show that digital assets are now mainstream. Thanksgiving, without operating. [queda do preço do Bitcoin] will be short-lived, with cryptocurrencies likely to rebound in the near term as investors will once again focus on rising fears of global inflation.”

While Green based his claims on the narrative that Bitcoin is the best inflation-protecting asset, Bitcoin’s recent slump has been accompanied by a rally in gold. Just the asset Bitcoin competes with when it comes to long-term store-of-value assets.

At the same time, some analysts have pointed out that the drop in Bitcoin price comes amid a drop in the hash rate – the measure of computing power mobilized by the Bitcoin network to perform and validate transactions.

Jason Deane, an analyst at cryptoactive research firm Quantum Economics, told the report that this coincidence sends a negative signal to the market:

“Both the hash rate and price have both fallen together in a way that suggests this is not a coincidence. While there are other factors at play, my initial view is that this drop is an overreaction of the market to what appears to be a problem, but not in real terms. This is the power of a decentralized system.”

Deane completed his reasoning by saying volatility should remain high in the short term and that “traders can expect a bumpy ride while the market makes its own assessment.”

Seeking answers to last night’s sale, a Cointelegraph report recalled that a sharp drop in Bitcoin occurred last year at exactly this time. In mid-November 2020, the BTC/USD pair dropped to around US$16,400 – and then surpassed the US$20,000 range, renewing its historic high for the first time in three years.