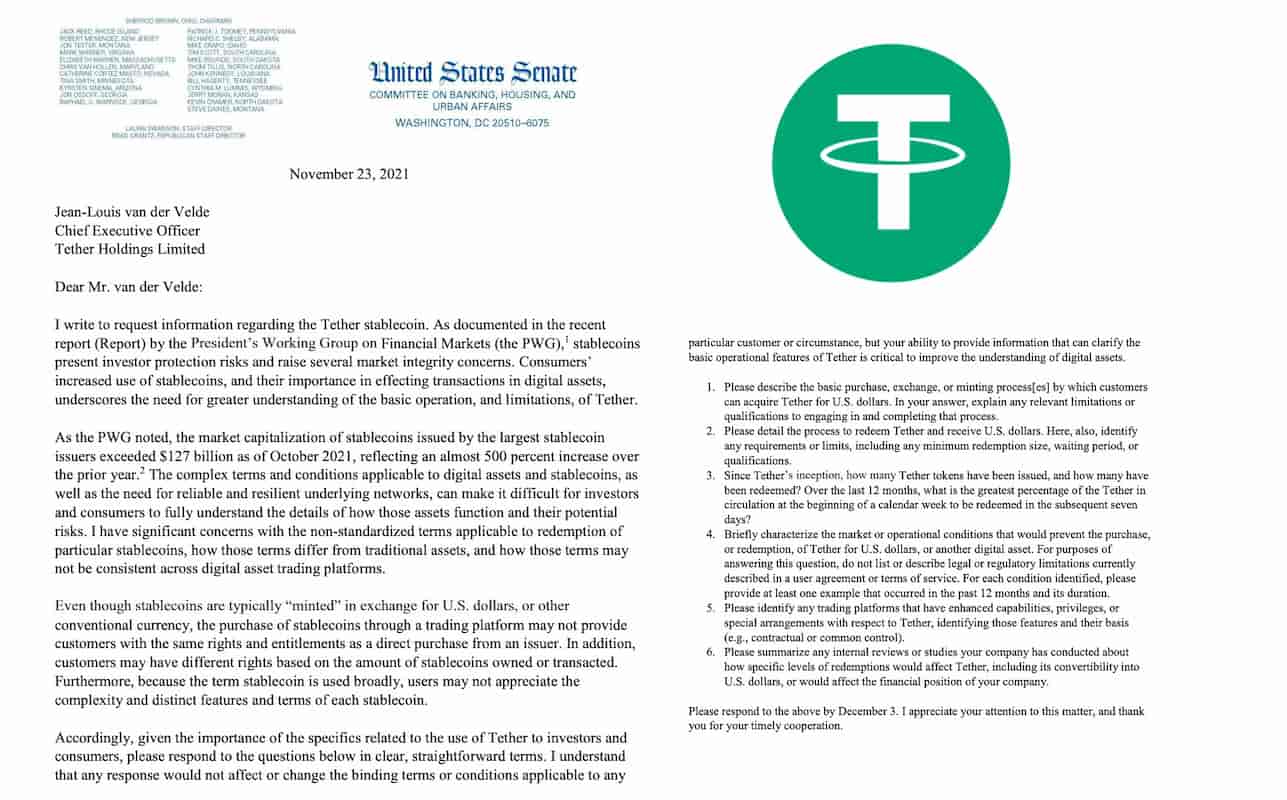 Tether, for example, the largest issuer of stablecoins – with the USDT, received criticism from the Commodity Futures Trading Commission, which claimed that the company did not fully guarantee its currencies with dollars for nearly four years.

That means they didn’t have enough dollars on hand to pay back any investors who could potentially redeem their assets.

There are also USDT critics who accuse the company of manipulating the market, by minting unbacked coins to buy cryptoactives like Bitcoin, causing a “pump” in prices with money that, in theory, does not exist.

USDT is the stablecoin with the largest trading volume and market capitalization.

Yesterday, on November 23, 2021, the United States Senate through the Committee on Banking, Housing and Urban Affairs, sent a letter addressed to Jean-Louis van der Velde, CEO of Tether Holdings Limited. Which I transcribe and translate below:

“I’m writing to request information about Tether’s stablecoin. As documented in the recent report (Report) of the President’s Working Group on Financial Markets (the PWG), stablecoins pose investor protection risks and raise a number of market integrity issues.

The growing use of stablecoins by consumers and their importance in performing transactions on digital assets emphasizes the need for a greater understanding of the basic operation and limitations of Tether.

As the PWG noted, the market capitalization of stablecoins issued by the largest stablecoin issuers surpassed $127bn in October 2021, reflecting an increase of nearly 500% over the previous year. The complex terms and conditions applicable to digital assets and stablecoins, as well as the need for reliable and resilient underlying networks, can make it difficult for investors and consumers to fully understand the details of how these assets function and their potential risks. I have major concerns about the non-standard terms applicable to the redemption of specific stablecoins, how these terms differ from traditional assets, and how these terms may not be consistent across digital asset trading platforms.

Even though stablecoins are typically “coined” in exchange for US dollars or another conventional currency, buying stablecoins through a trading platform may not provide customers with the same rights as a direct purchase from an issuer. Also, customers may have different entitlements based on the amount of stablecoins owned or traded.

Also, because the term stablecoin is used widely, users may not appreciate the complexity and distinct features of each stablecoin.

Therefore, given the importance of the details related to the use of Tether for investors and consumers, please answer the questions below clearly and directly. I understand that any response would not affect or change the binding terms or conditions applicable to any particular customer or circumstance, but your ability to provide information that may clarify Tether’s basic operational capabilities is critical to improving your understanding of digital assets.

The US Senate appears to want to put an end to the soap opera involving stablecoins and gather relevant information that could (1) serve as evidence for punishments against related companies; (2) serve as a basis and understanding for the elaboration of more accurate regulations regarding this type of asset.

This same letter was not only sent to Tether, but also to all other stablecoin stations with dollar, such as Binance (BUSD), Coinbase (USDC), Gemini (GUSD), among others.

As the crypto market is still mostly quoted, analyzed and valued in dollars, stablecoins have a very important role as trading pairs, being responsible for most of the volume traded.

On the one hand, it is very positive that we will finally have clearer and more transparent communication from stablecoin broadcasters, who may indeed be acting in bad faith and committing financial fraud. There is a lot of evidence to support this thesis.

This letter can be a milestone in this regard.

On the other hand, it is hard to believe that the US government’s mobilization is solely with the intention of protecting investors, as alleged in the letter, but that there is also an agenda behind it to continue guaranteeing the financial monopoly on the dollar and assets that they can function as pairs on exchanges, facilitating control, regulation, tax collection and the free ability to “print” more money, increasing inflation.

It would be so nice if the Fed also answered these same questions.

In any case, the release of these letters is a very plausible explanation for the insecurity, doubt, pessimism and downturn we are seeing in the cryptocurrency market, as we may be on the verge of discovering whether fraud and market manipulation has ever been committed by broadcasters stablecoins such as Tether as well as a US decision may directly affect market liquidity on a temporary basis.

It’s always good to do our own research and keep our eyes open.

Tether’s price plummets in India and is worth less than $1 dollar.

The USDT currency suffered a decline in India and was worth less than $1 for a few hours, but it has already rebounded after traders arbitrage with other pairs besides the INR. A similar drop occurred in January, also in India.

This drop may be related to the US Senate letter and regulatory pressures within India itself, which has been taking a more haughty stance against cryptocurrencies and, more specifically, against stablecoins.

THE END OF THE REAL!

Tether issues $1 billion in tokens, could Bitcoin go up?

What is the USDT’s backing? Tether reveals composition of its reserves

Dollar Tether is the third largest crypto, but its reputation is at risk
Bitcoin can spoil our youth, says Indian prime minister

More than 1 million ETH were burned worth R$23.6 billion

Bitcoin Cash Pyramid is the most transparent in the world, understand

One of the largest cryptoactive brokers in Brazil turns three in November and who wins is you!

There will be up to 30 zero rate currencies for transactions and more than 80 coins listed, with immediate withdrawals and high liquidity.

The cryptocurrencies at the best rates on the market! Just activate the free program novawards and take advantage of reduced rates by up to 75%.

Also know the NovaDAX Card and ask for yours now.